"New BFI research indicates that films written and/or directed by women performed strongly at the UK box office between 2010 and 2012.

Phyllida Lloyd and Abi Morgan attend the premiere of The Iron Lady (2011) at BFI Southbank.

Employing more women in writing and directing roles makes sound business sense for the film industry, according to new research from the BFI. Analysis of the performance of UK films between 2010-2012 shows that a high percentage of the most successful and profitable independent British films had a female screenwriter and/or director attached.

This is encouraging news and highlights the skill and talent of women working in the film industry today whose work both excites and inspires audiences. The creative industries underpin this country’s economic growth and are increasingly front and centre in representing Britain on the world stage. Of course, there is still a long way to go to address under-representation across the sector in general but with the number of women being employed within the creative industries growing year by year I know we can look forward to a future for film where the talent of women can shine.

Women are creating stories and characters that resonate with audiences in the UK and around the world, and it’s encouraging, and absolutely no surprise, to see films from women writers in particular really making an impact. Frustratingly, overall the numbers of women in writing and directing roles remains low and there is still much work to do to ensure female voices can come through. It is pleasing to see that investment through BFI Lottery funding and also our partners at BBC Films and Film4 plays an important role in championing women, supporting them to develop and consolidate their writing and directing careers and long may this continue.

A number of women also saw success on UK films which were financed by major studios in the US, including Sarah Smith (Arthur Christmas), Susanna White and Emma Thompson (Nanny McPhee and the Big Bang), Jane Goldman (X-Men: First Class) and Lone Scherfig (One Day).

A key feature of the research is the number of successful female writers and directors attached to more than one project over the period, with many of the directors also having directing credits in other dramatic media including television and theatre. This indicates the development of a critical mass of women with consolidated writing and directing careers, developed through film and also television and theatre, and on-going relationships with producers and funders of films. The same factors are shown by research to be present in the careers of successful male screenwriters and directors.

The report also shows that films with female writers or directors were more likely to have female producers or executive producers, and have received financial support through BFI Lottery and BBC Films or Film4.

Today’s announcement comes hot on the heels of Creative Skillset’s 2012 Employment Census 2012, which showed that employment of women in the creative media industries has grown by almost 16,000 since 2009, with representation rising from 27% to 36% of the total workforce. This reverses the previous decline seen between 2006 and 2009, where the representation of women in the workforce reduced from 38% to 27%. Within that total, representation within film and TV is actually higher than the average across the wider creative media industries. In 2012 women made up 46% of the total film workforce (not including freelancers)." 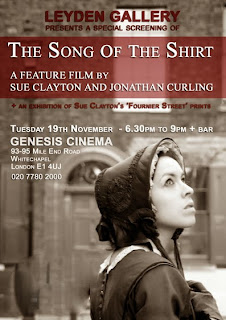 At first glance, The Song of the Shirt is hard to enjoy. The opening consists of migraine-inducing overlapping texts; squawking free-form clarinets, and jumbled quick-fire quotes. It seems initially that this attempt to deconstruct the grand narratives of liberal history, and reform the component parts into a radical critique, lacks any kind of structural coherence. However, it soon emerges that this actually a brilliant foreshadowing of the structure of the film. Eventually, out of the chaos comes a brilliantly orchestrated profundity.

From a 21st century perspective, Sue Clayton and Jonathon Curling’s film grates at first, but when it comes together, it resembles a beautiful pointillist portrait – putting small particles together to construct a meaningful whole. It is a style that has since become common-place in mainstream cinema. From Pulp Fiction (1994) to Cloud Atlas (2012), this non-linear, scrap-book-narrative style is one many cinema goers will now be familiar with.

Were the film made today, with the benefit of other forebears laying groundwork, Clayton and Curling’s vision would be a great deal more polished, and probably better remembered. As it is, the film has lain dormant amongst a catalogue of similar forgotten pioneers. Fortunately, it was dusted off and revived this week by the Genesis Cinema in Whitechapel, London, as a result of Sue Clayton’s new work for the Leydon Gallery, resurrecting the film’s character of the seamstress, placing her in modern London.

In the film, as the fragments of the past come together, we see through the plight of the penniless seamstresses, supposedly beneficiaries of the industrial revolution, how capitalism reduces millions of people to lives of exploitation, bereft of hope and dignity. However, whilst class is central to its message, the film makes as an important point when it then brings in a second strand of oppression that interplays with it; gender. We see how those critical of the suffering brought about by economic relations, and those who advocate the emancipation of the working man, can also conflictingly reinforce the subjugation of women. Clayton and Curling flag up crude, hypocritical domination of male trade unionists decrying how women are driving down their husband’s wages, and calling for women to withdraw to home-life; but we also see this coupled with a critique of the ideological objectification that women suffer in patriarchal literature.
This is illustrated by a behind-the-scenes-style exchange between the authors of The Wrongs of a Woman, a Victorian newspaper serial, in which the impoverished female protagonist falls for a wealthy student. After part 3 leaves the couple in each others arms, a discussion takes place as to how it should end – the “inevitable” conclusion being that “she should commit suicide” to further illustrate the horrors of poverty. The male authors are displayed here as key to patriarchal ideology, as objectifying female characters like this perpetuates their domination – depriving women of agency, making them hapless tools of the fates, and dependent on men of power, and men more generally, to ensure their survival.

The film itself by contrast is unwilling to give us even this depressing closure in its conclusion. The women of the piece - exploited and desperate as they are - are neither driven to suicide or to revolution. Their fate remains ambiguous, as if to suggest that the struggle remains unresolved to this day. This is the genius of The Song of the Shirt though; it pulls apart the grand historical narrative of male-driven progress – found in ‘factual’ and fictional materials - and reconstructs the constituent parts into a call to arms against modern-day patriarchal capitalism.  The film’s revival should not stop here then – after all this time, it deserves greater recognition than a one off screening. This forgotten gem about ‘lowly’ seamstresses counters the grand historical fabrications that working class women’s fate is in anybody’s hands but their own – a lesson that still needs learning, over three decades later.

Posted by Eylem Atakav and Melanie Williams at 04:08 No comments: