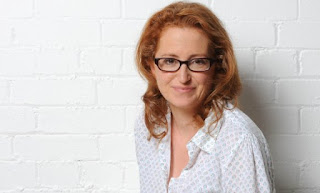 Who is the auteur of a TV series? Is it the director? The writer? The producer?  A show might use a number of directors during the course of a series, and it is even more common for there to be a change of director if a show is recommissioned for many seasons. Solo-authored shows are becoming less common; some writers might pen multiple episodes, others just one, or there may be a writing duo or team scripting the series. Television auteurism has tended to favour producers, but contemporary series often have a host of them. Where is the singular creative vision to be located in television production?

I’m well aware that these aren’t new questions, they’ve been asked frequently by media commentators and academics. Yet a talk given by Lucy Lumsden at the BFI this month prompted me to revisit - and reconsider - the notion of the TV Auteur, particularly in British television comedy. Lumsden joined Sky as its first Head of Comedy in the Autumn of 2009, after leaving her post as the BBC’s controller of comedy commissioning earlier that year, and has since commissioned the broadcaster’s entire comedy slate. Lumsden has become the Poster Woman for not only Sky’s assertive push into the genre, but for a broader revival of scripted comedy on British television. (The choice of title for the BFI event, ‘TV’s Comedy Renaissance: Lucy Lumsden in Conversation’, underscoring this).

Sky’s comedies, such as Trollied (which debuted with 1.2 million viewers, Sky1’s biggest overnight rating of 2011), Mount Pleasant, Stella, The Café and Spy (for which Darren Boyd won a 2012 BAFTA for Best Comedy Performance), have generated a lot of industry and press buzz. However there’s more than just a sense of novelty unifying Lumsden’s commissions to date. These shows seem to have a distinct tone, a particular flavour which brings them together as a body of work in spite of the range of producers, directors, writers and on-screen talent involved. When talking about the development of Sky’s comedy program, there were three characteristics that Lumsden indicated were common to all the shows: place, family, and love.

When Lumsden’s role was created Sky was best known for its American acquisitions and so an important rationale behind new commissions was that they reflected modern Britain; ‘that it was about us’ as she puts it. To do that she focused on precinct shows, with which came ‘a strong sense of place’: Trollied in a Warrington supermarket, The Café set in Weston-super-Mare, Stella in the Welsh valleys. However she swiftly adds that there was a more pragmatic reason for the emphasis on regionality in the shows’ settings, in that ‘it’s a bit of a shortcut to having strong characters with a very strong identity’.

Media observers have been quick to suggest that TV comedy’s revitalization is linked to the economic recession, but Lumsden denies this: ‘When I started that wasn’t the mantra of the time. What is that about? I think it was about a return to family maybe; sort of values that felt very important.’ This seems to connect significantly with the quality she suggests is central to all Sky’s comedy crop so far, something which may have been lacking in the genre in the preceding years. ‘The other thing is love is at the heart of pretty much all of our shows’, she says, ‘I’m not obsessed with this, and there will be other sorts of comedy, but I just felt we needed it. We needed it in our comedy.’ Love also seems to be at the heart of Lumsden’s relationship with the comedies themselves. She claims she has been able to work more closely with producers, writers and directors than in her BBC role, and so has felt much more connected to her commissions: ‘I’ve enjoyed a bit more of a personal relationship with each of the shows, it’s really creatively rewarding to feel you’re at the beginning of each journey’.

Lumsden’s motivations, sensibility and approach to comedy production – the atmosphere of creative freedom she has sought to create – have given Sky’s comedy output a clear sense of brand. There’s certainly a strong argument for presenting her as a contemporary television auteur. She, however, is uneasy about the mantle that has been placed upon her and speaks self-deprecatingly about being ‘just thrilled’ to be involved during such a great time for comedy. ‘I mean, look at that’ she says, indicating the projection of the BFI talk’s title, ‘it feels a bit ridiculous, a bit surreal!’
Posted by Eylem Atakav and Melanie Williams at 07:00 No comments: 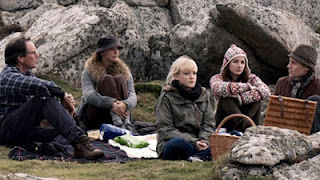 
The director who seems to best understand the English bourgeoisie at this moment in time is Joanna Hogg. Her films Unrelated (2008) and Archipelago (2010) both deal with the exquisite tortures of middle-class holidays which descend from conviviality into confrontation and conflict. In her debut feature, Unrelated, it was an Italian villa somewhere in ‘Chianti-shire’ which provided the setting, and the focus was on the midlife crisis of Anna (Kathryn Worth) as she wondered with which generational grouping in the holiday party she should align herself. In Archipelago, Hogg’s second feature, the focus is more diffuse, stretching across a number of family members gathered together for a holiday on the Scilly Islands, including grown-up brother and sister Edward (Tom Hiddleston) and Cynthia (Lydia Leonard), their mother Patricia (Kate Fahy), their hired cook Rose (Amy Lloyd) and their painting instructor Christopher (Christopher Baker). The occasion for the gathering is the son’s last family holiday before he embarks for voluntary work in Africa, an updated version of the ‘white man’s burden’ for upstanding young Englishmen. The film is careful not to play this for obvious satire, instead imbuing his social concern with sincerity and a sense of vocation, even if it is slightly wavering and uncertain (Hiddleston plays a quite different character from the cruel cocksure boy he portrayed in Hogg’s Unrelated). ‘Africa’ figures in Archipelago was a different kind of world beyond the confines of the middle-class family, the possibility of a less hampered existence but also a more dangerous one. Not that the Tresco holiday home is a quiet but dull pastoral idyll – anything but. Edward’s missionary impulses seem to bring out the worst in Cynthia who accuses him of self-important self-righteousness cloaked by false modesty. Tom’s immanent departure and the awkward friendship he strikes up with Rose, asking her about her life and wanting to invite her to dine with the family, seem to act as twin flashpoints for Cynthia’s anger, manifesting first in behind-the-back sniping and second in outright argument. The film’s outstanding set-piece is undoubtedly the fraught group outing to a restaurant which goes from bad (not being able to settle on the best place to sit and moving tables several time) to worse (Cynthia’s passive-aggressive response to what she perceives to be an undercooked guinea fowl; Lydia Leonard’s performance is brilliantly excruciating here). As the holiday goes increasingly awry, the mother attempts to intervene, albeit ineffectually, and Hogg punctuates the drama with a series of phone calls to the absent patriarch (who is meant to be there but keeps being unaccountably delayed) which begin with expressions of maternal contentment, and how wonderful it is to be gathered together like old times, but soon deteriorate into desperate pleading with him to come and help and finally furious accusations of neglect. In less coolly assured hands, it could be a cliché but Hogg’s directorial control and her sympathetic immersion in the milieu of her characters insures that Archipelago presents with verve and astringent originality the old truism that the comfortably-off family can be anything but comfortable at times.
Posted by Eylem Atakav and Melanie Williams at 11:44 2 comments: 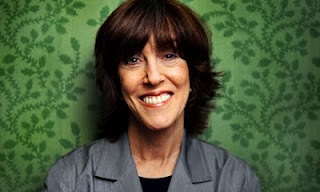 It goes without saying that Auteuse Theory was very sad to hear of the passing of Nora Ephron, one of the most distinctive female authorial voices in Hollywood over the last 30-odd years. Despite her light-hearted statement of antipathy towards 'panels on women in film' (one of the things she said she wouldn't miss after her death: http://www.guardian.co.uk/film/2012/jun/27/nora-ephron-miss-wont-miss), her work demonstrated the significant difference that a female point-of-view could make in the treatment of women on the screen.
Here are some of the tribute pieces we particularly enjoyed on Ephron:

Posted by Eylem Atakav and Melanie Williams at 06:16 No comments: