The University of East Anglia, UK


uilding on the success of the first ‘Doing Women’s Film History’ conference held in 2011, this three-day international conference will bring together researchers in women’s film and television history, archivists, curators and creative practitioners to explore and celebrate all aspects of women’s participation within the visual media industries across the globe and in all periods. The conference will provide a forum for the latest research into women’s work in film and television production (both on and off screen), in film distribution and exhibition, their roles in television ranging from presenters and personalities to commissioners and controllers, as well as women’s activities as film and television critics, consumers and fans.


We welcome papers on any topic related to women’s film, television and media history but we are also interested in hosting panels and strands on the following areas:


·         women and documentary: whose voices, which audiences, to whose benefit?


·         screenwriters and scriptwriting: the woman writer


Proposals of 300 words for papers should be sent to doingwomensfilmandtvhistory@uea.ac.uk
no later than 31st October 2013

Posted by Eylem Atakav and Melanie Williams at 08:24 1 comment:

MELANIE WILLIAMS﻿﻿﻿﻿﻿﻿
﻿
﻿﻿
Continuity Supervisor is one of those vital but somewhat mysterious jobs in film production, akin to the likes of key grip, foley artist or best boy, although thanks to the bloopers section on IMDb and various TV programmes gleefully pointing out continuity errors, there is at least some popular understanding of what overseeing continuity might entail, i.e. avoiding those kind of embarrassing inconsistencies that come back to haunt a film. But what is less well known is the sheer scale and scope of the job and how it requires near-omniscient levels of vigilance. As the experienced supervisor Angela Allen explained in an interview, her purpose on set was to function as a kind of  human ‘memory bank’, recording all the vital data about who was doing what as they said a particular line, how the set was dressed, what people were wearing, and so on. Another continuity supervisor, Phyllis Crocker, described her role in similar terms back in 1947:

The continuity girl is on the set for the whole time during rehearsal and shooting, making careful note of everything that is essential for the record, and being at hand to prompt both director and artists on dialogue, movement, position and effects. She has her own desk and typewriter on the set and while one scene is being set up, she is putting the previous one on permanent record. She is, in fact, the clerical repository of all the information that the director carries more or less vaguely in his head. (Collier 1947: 58)
Note Crocker's exclusive use of female pronouns here as well as the telling nomenclature of 'continuity girl': continuity supervision was an area of film labour overwhelmingly occupied by women, and to some extent continues to be - at least in the UK.
And despite its crucial role in successful film production, continuity supervisor isn’t a job with huge prestige attached, unlike other equally key roles which arguably enjoy a more elevated position. Could that have something to do with the particularly gendered status of overseeing continuity? Film historian Sue Harper certainly believes there’s a connection between the two, suggesting that its position in the industry as a ‘female prerogative’ is intimately connected to its ‘attendant lack of status’ (2000: 4).
Certainly, struggles for status and recognition resonate through many accounts of the job, whether in Kay Mander’s insistence that the continuity girl is ‘more than a “floor secretary’’ – she is indeed a technician’ and ‘one of only three people on the set who are expected to have an encyclopaedic knowledge of the script’ along with the director and his assistant (1940: 89), or in Pamela Mann-Francis’ lengthy struggles to achieve Association of Cine Technicians (ACT) union membership, allowing her to put ‘film technician’ rather than ‘secretary’ as her profession on her passport. But as Sian Busby suggests, the continuity girl is also ‘often her own worst enemy’ when it comes to recognition of her hidden labour, ‘unobtrusively going about the task of making significant changes, corrections and improvements so that no incongruities remain; quietly curtailing production costs; acting unassumingly as aide memoire cast and crew; reassuringly sharing the burden of coverage with the director (1993: 18).
Continuity work often appears to supersede its official demarcation, as the continuity girl Martha Robinson once suggested, taking in ‘not only their own official job but, unofficially, that of First or Second assistant director, production manager, assistant cutting editor, dialogue writer and even co-director’. Robinson saw this in highly gendered terms: ‘Women are like that. If they see work neglected, they unobtrusively do it themselves and think nothing of it’ (1937: viii).
It may be a rhetorical step too far to claim 'auteuse' status for all continuity supervisors but it seems that the extent of their creative input into the filmmaking process may well have been vastly underestimated and worthy of a great deal more investigation.
Sources:
Busby, S. (1993), ‘Continuity: a job for the girls’, In Sync (Journal of Women in Film and Television), 3:1, pp. 18 and 22.
Collier, J. W. (1947), A Film in the Making, Featuring It Always Rains on Sunday, London: World Film Publications.
Harper, S. (2000), Women in British Cinema: Mad, Bad and Dangerous to Know, London: Continuum.
Mander, K. (1940), ‘Cutter’s fifth column’, Cine-Technician, October–December, p. 89.

On Lisa Cholodenko and 'The Kids are All Right' 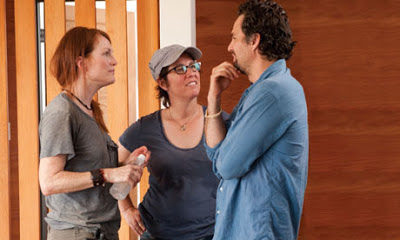 Recently my colleagues at The Black List, with the help of Susana Orozoco, released a visual analysis of spec script sales over the past two decades. Speculative screenplays, known in the entertainment industry as "specs," are scripts penned by a writer with no initial compensation and "the intent of selling the final product on the open market." As several sources have already noted, "women writers' scripts currently make up a smaller percentage of spec sales than at any time in the last two decades." Certainly this is a disheartening figure, one that reaffirms the egregious state of the industry for women and the immense progress that must be made for us to stand on equal footing with men.


Perhaps even more dismaying is the fact that more than ten years ago women screenwriters were selling nearly twice as many specs as they are now.

Some have theorized this could be due to:


• The collapse of home video sales


• Women's perceived "attraction" to different genres (comedy, romantic comedy, drama) than men, who are more believed to have the dominant interest in commercial, male-oriented projects


• The assumption that fewer women are interested in pursuing screenwriting during their education or as a career (28.9% of applicants for the Nicholl Fellowship in Screenwriting this year were women)

A recent study from the Sundance Institute and Women in Film, however, sheds more light on the subject with hard data:


(a) Independent narrative film relies on a funding structure that is primarily operated by males.


(b) Female-helmed projects are perceived to lack commercial viability.


(c) Women are viewed as less confident when they ask for film financing.


Moreover, the most frequently suggested ways to change the status quo are:


As the study notes, "this last strategy may be particularly salient, given that some respondents indicated their belief that gender inequality is improving over time or is not any worse than in other industries."


But this assumption of improvement may not be accurate. If the spec sales trend continues, the numbers are actually going down. As a result there's a real sense of urgency that comes with this analysis; a need to work together to find timely solutions.


What are YOUR ideas? Do you agree with the study's suggestions of how to include more women in the industry or are there other approaches that haven't yet been considered? Sound off below.

Posted by Eylem Atakav and Melanie Williams at 03:34 1 comment: