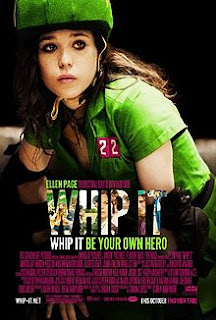 HELEN WARNER
Drew Barrymore’s directorial debut, Whip It! has been described as an ‘emo chick coming of age drama’. The film follows Bliss Cavendar (Ellen Page), a conflicted 17 year old girl from the fictional town of Bodeen, Texas who attempts to negotiate the expectations of her mother (Marcia Gay Harden), a beauty pageant enthusiast, and her own desires. On a shopping trip to Austin with her mother and younger sister, Bliss encounters some roller derby players and her fascination with the sport leads her to sneak off to a game. After lying about her age and trying out in secret, Bliss – now Babe Ruthless (her derby name) - earns a spot on the Hurl Scouts; a underachieving group of misfit women headed by team captain, Maggie Mayhem (Kristin Wiig). The film, then details her experiences of love, friendship and family, as she pursues her passion.
Barrymore has, of course, enjoyed a lengthy career in front of the camera (which is somewhat exceptional given the oft-discussed short lifespan of female actresses/celebrities) before adopting a role behind the scenes. In 1995 Barrymore began the production company, Flower Films and in 2004 she directed a television documentary on youth voting in the US election process. When asked about her career as a filmmaker, she replied: ‘I try to make movies that I would want to go see rather than ones I would just want to do as an actor. I want people to have movies full of romance and hope and empowerment, something they can escape into and feel good about. I love happy endings’.
Whip It! certainly falls into this category and can be situated within a tradition of female sports films (A League of their Own; Girlfight; Bend it Like Beckham)  which use sport as a lens through which to examine those themes of the melodrama  often coded as ‘feminine’ (namely romance and familial obligation). Whip It! is no exception. The main narrative focus is Bliss and her turbulent relationship with her mother. In many ways, Whip It! taps into the cultural fascination with mothers and daughters as exemplified in Kathleen Rowe Karyln’s Unruly Girls and Unrepentant Mothers, which valorises ‘unruly femininities’. Following her first sexual encounter with Oliver (Landon Pigg), Bliss is confronted by her mother who has since learned of her participation in roller derby. During the heated exchange, it becomes clear that her mother’s real displeasure originates from a concern that derby puts Bliss’ femininity at risk (‘What do you think the world thinks about those girls with all their tattoos? Do you think they have an easy time finding a job or getting a loan application or going to college, or finding a husband’). In response, Bliss simply replies; ‘I’m in love with this’ and in so doing reminds the audience that, despite her obvious attraction to Oliver, Bliss remains committed to an activity which fulfils her in ways that romance cannot. The film ends with Bliss and her mother learning a mutual respect for one another without fully understanding each other’s life choices.
There are some weaknesses in execution, for example, the heavy handed revelation that Maggie Mayhem, (despite her tattoos and passion for derby) is a mother. However, for the most part Whip It! offers a sentimental, but not ‘schmaltzy’ examination of contemporary girlhood which manages to avoid problematic stereotypes of ‘bitchy’, ‘irrational’ and/or ‘passive’ women. Since popular culture fosters an ambiguous relationship with feminist politics, it is often futile to claim that a film is either progressive or regressive in its representation of women. However, refreshingly Barrymore has made no secret of her feminist agenda, which underpins Whip It!. She claims: ‘I love women who have fought to the change the world and made a difference. I want to be one of them myself.’
Posted by Eylem Atakav and Melanie Williams at 07:21 No comments:

Email ThisBlogThis!Share to TwitterShare to FacebookShare to Pinterest
Labels: A League of their Own, Bend it like Beckham, Drew Barrymore, Girlfight, Kathleen Rowe Karlyn, Unruly Girls and Unrepentant Mothers, Whip It 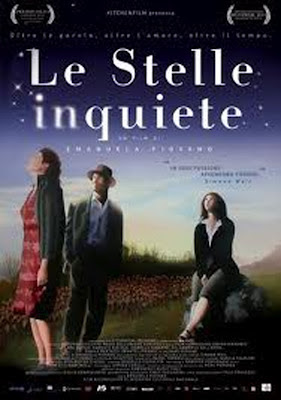 The publication of Off Screen: Women and Film in Italy in 1988 and The Women’s Companion to International Film in 1990 (marked the beginning of an international interest in Italian women filmmakers. Ten years later, Dizionario delle registe: L’altra metà del cinema, the first and laudable attempt to produce a comprehensive and detailed volume on Italian women directors, informed international academia of the remarkable number of women operating in the film industry and the impressive quality of their work. More recently, three additional publications--Glass Ceiling. Oltre il soffitto di vetro. Professionalità femminili nel cinema italiano; Lost Diva Found Woman. Female Representations in New Italian Cinema and National Television from 1995 to 2005; and I Morandini delle donne. 60 anni di cinema italiano al femminile – further document and recognise the vast contribution made by women (actresses, directors, screen writers, producers and costume designers) to the history of Italian cinema.
The complex and variegated galaxy of contemporary Italian cinema includes multiple generations of women filmmakers all engaged in exploring new genres and hybridised aesthetics. Although working in a hostile climate of economic austerity, talented, energetic, innovative voices and creative forces take various directions and continue to gain international recognition. There is great need for research that evaluates the continued and rising visibility of women directors whose works provide a multifaceted definition of Italian cinema and who represent a rich and vital artistic make-up within the obstacles and contradictions that regulate the Italian national context. These directors interweave private spheres and public events, explore contemporary realities, re-examine intellectual figures, and revisit historical wounds, while producing a montage of artistic documents and provocative testimonies. The range and quality of their diverse works offer great promise for the future of women behind the camera in twenty-first century Italy.
Director and producer Emanuela Piovano’s most recent film Le stelle inquiete/Simone and Gustave (2010) is the first feature film made about the French philosopher Simone Weil (1909-43). Simone and Gustave is not a bio-picture, but it is specifically about an unknown fragment of Weil’s life, the summer months that she spent in 1941, when in July she was forced to leave German-occupied Paris to avoid anti-Semitic prosecution. She moved to St. Marcel, near Marseille, in the Ardèche region of southern France, where she was a guest at the vineyard owned by the philosopher-farmer Gustave Thibon and his wife Yvette. Piovano gives an intimate portrait of Weil, choosing to present her feminine side and private relations, in the broad context of her social activism, political theories and philosophical thought. The film conjugates the art of cinema with history, poetry, mysticism, philosophy and social militancy. As Weil familiarizes herself with working conditions on the farm, she engages in extended philosophical conversations and exchanges of views with the Catholic, royalist and spiritualist Gustave. Inevitably a burning intellectual passion for new ideas ignites their encounters.
Posted by Eylem Atakav and Melanie Williams at 15:37 No comments: