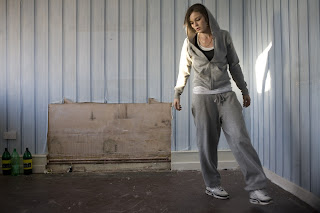 Fish Tank focuses its attention on fifteen year old Mia who lives in a flat in Essex with her mother and her younger sister. Mia is a rebellious loner whose relationship with her mother is antagonistic and mutually verbally abusive. But Mia has a secret passion: dancing, which she practices in an abandoned flat. Her mother’s charming handsome new boyfriend Connor encourages and praises her dancing and Mia is obviously drawn to him. As their relationship develops, it shifts from paternal to sexual. Connor leaves but Mia tracks him down and discovers he already has a wife and child. Mia is tempted to take a terrible vengeance but finally relents and returns home. She attends her audition but leaves without dancing, put off by the sexualised atmosphere. Offered a road trip to with her on/off traveller boyfriend Billy, she leaves home, after a tentative but unsentimental reconciliation with her mother.
Writer-director Andrea Arnold is highly distinctive in contemporary British film culture in her yoking of a social realist aesthetic to a focus on the lives of girls and women in working-class communities. Her settings have ranged from her native Dartford for her Oscar-winning short film Wasp (2003) to for the surveillance drama Red Road (2006) and finally to the high-rise estates of for Fish Tank, but all three films are connected through their focus on female experience. Although the most obvious points of contextualisation for ’s films are current work by the likes of Shane Meadows and veteran Ken Loach, there are also noticeable links with British cinema of the past. For instance, Fish Tank’s study of an awkward teenager’s sexual awakening and her antagonistic relationship with her sexually active mother echoes the exploration of a similar family dynamic nearly fifty years previously in the British New Wave milestone A Taste of Honey (1961).
Akin to the casting methods deployed by Loach and Meadows, Arnold wanted a non-professional actor for the central role in Fish Tank, someone who would not merely play the character of combative teenager Mia but understand her intimately through her own life experience. When Katie Jarvis was spotted arguing with her boyfriend at Tilbury railway station, she was hastily signed up and Jarvis exceeds all expectations of a complete newcomer to acting with a riveting debut performance which oscillates between sullen anger and heart-breaking vulnerability. Ambiguity is the keynote of Michael Fassbender’s performance as Mia's mother’s amiably sexy Irish boyfriend Connor, initially behaving towards Mia in ways that could be simultaneously interpreted as warmly avuncular or sexually loaded. Arnold, in this film as in her previous ones, evokes her heroine’s sexual desire through an aesthetic suggestive of a female gaze: examples include the close-up of Danny Dyer’s mouth from Nathalie Press’s lustful perspective in Wasp, the heroine’s tracking of her future lover via CCTV in Red Road, and Mia’s use of the video camera to record and play back a bare-chested Connor as he dresses, as well as her covert voyeuristic observation of her mother and Connor’s lovemaking in Fish Tank. However, the film also communicates sexual attraction in more sensual terms with slow-motion close-ups of Mia enjoying the physical closeness of a piggy-back ride or breathing in Connor’s freshly-spritzed aftershave when he bends over her.
Fish Tank refuses gushing sentimentality: Mia does not forge a triumphant career in dance, mother and daughter are not reconciled in a tearful embrace (a brisk smile when they spontaneously dance together in the flat is as warm as it gets) and although we empathise with her, Mia is also capable of cruelty, foregrounded in one stomach-churning sequence where we fear she may commit a terrible act of revenge. And lest we assume that Fish Tank is directly autobiographical, given Andrea Arnold’s own Thames Estuary upbringing and her early career as a dancer, the director provides an important corrective: ‘Those things have never directly happened to me. My mind goes places, I have an imagination.’

Posted by Eylem Atakav and Melanie Williams at 07:17