On Women and Turkish Cinema 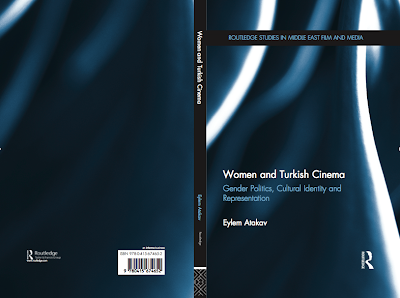 Earlier in November my book Women and Turkish Cinema was published by Routledge. Here, I would like to share some thoughts on the volume for those who may have an interest on the topic. Every book is and offers a journey, and so, here is a part of mine...

Following a decade of increased and violent polarisation between Left and Right in Turkish politics, the army decided to intervene to put an end to what appeared to be incipient civil war. The military intervention of September 12th 1980 aimed towards a period of depoliticisation in society as it crushed all political parties and particularly leftist organisations, while temporarily suspending democracy and thereby bringing normal political life to a complete halt. I, Atıl Eylem, was born a year after the coup. My name is an extremely politically resonant name which literally means ‘go for action’ and has an overt link with the leftist political activism that both my parents were involved in. As I explain in detail in the Introduction of the book:
“The story behind my name does not only refer to the name of one of the left wing journals (Atılım) which had to be published clandestinely, but also assigns me the role and pride of carrying the keywords of the left wing activists who fought, and at times were either killed or went through serious physical and mental torture, for their ideas. I was born a year after my father lost his comrade (arkadaş) who was shot while being carried wounded in his arms (still trying to voice his ideas); and after my mother and father had cried for their books which died in the cold damp cellar of a friend’s house, while being hidden from the police, who were inspecting every house to find censored books. Whoever had a copy of Das Kapital, was to be stamped as leftist, and hence needed to be under strict scrutiny by the police. These books full of ‘dangerous’ ideas should be burnt. Those who had managed to read them did so by covering them with gazette papers or hiding them behind the covers of other non-dangerous books. I was born on a day when no newspapers were published, because it was a religious holiday.”
This personal background informs my initial interest in analysing this decade’s political, social and cultural environment from a critical perspective. In the repressive and depoliticised atmosphere of the post-coup period, the first social movement that emerged and articulated its demands was the women’s movement. It expanded the scope of pluralism and democracy in Turkey through different concerns communicated by women in the public realm. Although feminist ideology is overtly political, in this period of depoliticisation the movement was only able to exist because its activists sought to free themselves from both the Right and the Left and any other clearly partisan political label and they did not found any institutions seeking to increase women’s political representation. Following the establishment of the Turkish Republic in 1923 women had been given rights by the state through what is often termed state feminism. In the 1980s women were, for the first time, raising their own independent voices through campaigns, festivals, demonstrations, publications of journals and the forming of consciousness-raising groups.

Profoundly affected by the social and political milieu, Turkish cinema went through a period of change in the 1980s. Overtly political or social realist films were censored, banned or destroyed as a result of the forcible depoliticisation in the aftermath of the coup. Women’s lives and issues (perceived as neither Left wing nor Right wing and hence apolitical) became prominent in Turkish cinema and this led to the production of an extensive body of women’s films.
This brings me to the central proposition of this book, that is: the enforced depoliticisation introduced after the coup is responsible for uniting feminism and film in 1980s Turkey. The feminist movement was able to flourish precisely because it was not perceived as political or politically significant. In a parallel move in the films of the 1980s there was an increased tendency to focus on the individual, on women’s issues and lives, in order to avoid the overtly political.

The key questions that frame my analysis here are: What is the link between the women’s movement and representation of women in Turkish cinema in the 1980s? Were cinema and the women’s movement both affected in the same way in the post-coup political milieu? Were films affected by the movement or were they simply marginalising political issues by focusing on women’s lives?

In the book, I also focus on contemporary women filmmakers in Turkey who tend to concentrate on a range of issues around political, cultural and ethnic identity as well as memory. It is also in this section that I offer a further study into the representation of women of Turkey in several documentaries made by women directors who live outside Turkey, which has the relationship between religion and women’s place in Turkey in the centre of their narratives. Olga Nakkas’ 2006 film Women of Turkey: Between Islam and Secularism, for instance, draws on interviews with women and examines the individual and political resonance of the headscarf and veiling. Binnur Karaevli’s 2009 film Voices Unveiled: Turkish Women Who Dare provides a critique of the ban on wearing headscarves at the same time as touching upon issues including female officers in mosques; violence in the name of Islam; lack of education and economic dependence of women; women and Turkey’s EU candidacy and the tensions inherent between Muslim and Western cultures.
Posted by Eylem Atakav and Melanie Williams at 03:39 3 comments: 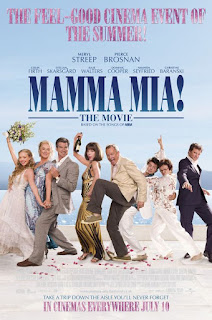 Since this week sees the publication of my co-edited (with Louise FitzGerald) volume on the much maligned, but also much loved and highly successful Mamma Mia! The Movie, it seems like a good time for Auteuse Theory to revisit the film with specific reference to female authorship. This was a film, after all, which boasted not only a female director in Phyllida Lloyd but also a female screenwriter (Catherine Johnson) and female producer (Judy Craymer), keeping together the all-female team which had collaborated on the original stage musical. This made the film, according to one of its stars Colin Firth, ‘the most thoroughly brought-to-you-by-women package’, and indeed, its female authorship has frequently been seen as the key to the film's subsequent success with female audiences. Its central narrative placement of an older female protagonist (Meryl Streep's Donna) who is not demonised for her racy past, and its evocation of close female friendship between Donna and her two ex bandmates (played by Julie Walters and Christine Baranski) have certainly been read as symptomatic of a uniquely feminine perspective not often permitted in contemporary Hollywood film. For novelist Naomi Alderman, the film offered a rare instance of a female gaze in operation, citing the costuming of Amanda Seyfried in a one-piece swimsuit rather than a skimpy bikini as evidence: ‘She looks like a young girl really would look on a beach in Greece. It makes you feel relaxed, as a woman watching.’ Phyllida Lloyd’s DVD director’s commentary would seem to concur with this idea of the female director possessing special intimate female knowledge to which a male director might not necessarily be party, which can then be conveyed onto the screen. She says of the moment when Sophie cuts her leg shaving during ‘Slipping Through my Fingers’ that ‘girls would understand the trauma of that on their wedding day’. Although it’s not the same, there does seem to be a kinship with an anecdote Samantha Morton recounted about the filming of Morvern Callar (2002) directed by Lynne Ramsay: ‘I was doing that sex scene and I was on my period, and me and Lynne were both like, well, what are we going to do, because my Tampax string was showing. And in the end she just stopped the camera, leaned over and cut it off. And for all sorts of reasons, I can't imagine a man doing that.’ Both suggest the special interior embodied knowledge of female experience in the woman director that enables them to approach their work in a different way from a male director.
That female authorship might actually be a marketable commodity is suggested in certain aspects of Mamma Mia!'s publicity campaign which made canny use of the parallels between the three female friends onscreen and the three female friends behind its making, as Judy Craymer suggests: ‘The studio was promoting the three of us as this trio. They saw us as the women.’ (It would be interesting to explore how these ideas have figured in the trio's subsequent, separate, work, such as Craymer's Spice Girls musical Viva Forever! premiered last week, or Lloyd's current all-female production of Julius Caesar or her controversial 2011 collaboration with Streep, The Iron Lady).
But there's a complicating factor in assigning authorship of Mamma Mia! to Craymer, Lloyd or Johnson, of course, and that is the fact that Mamma Mia! is a jukebox musical, heavily dependent on the pre-existing songs of ABBA, sung by Frida and Agnetha but composed by Benny and Bjorn. Given the already prominent position of ABBA in popular culture, it is not surprising that the musical's female creative team have often conceptualised themselves less as original creators and more as self-effacing ‘handmaidens’ to Benny and Bjorn’s vision, facilitating something that was already latent in the songs and just needed bringing out: ‘This was the musical Benny and Bjorn didn’t realise they’d written’, says Lloyd in the film's production notes. Both men also enjoy a ‘Hitchcockian cameo’ in the film, an authorial privilege not extended (to my knowledge) to any of the trio of women.
But in the end, authorship is perhaps less important than audience reception when thinking about gender in relation to this film. Mamma Mia! The Movie, like its theatrical antecedent, offered a wonderful platform for audience participation, especially singing and sometimes dancing along with the ABBA hits liberally sprinkled throughout. As Jane Fryer noted, in her jokily quasi-anthropological investigation into the film's success, screenings of this film flouted the usual decorum of ‘going to the cinema to sit quietly and “Shush!” loudly at anyone rattling sweet wrappers too noisily’ and replaced it with the unusual but ‘incredibly moving’ situation of ‘belting out Abba songs with a bunch of strange women and the occasional startled man’. As one 38-year-old female cinemagoer ‘almost buried under two great vats of popcorn’ testified, joining in was ‘the whole point. You become part of it — you’re in the chorus, you’re on the island, you’re at the wedding, you’re finding true love…but most of all, you’re having a great time’. And this could be expanded into participatory events as vast as the series of ‘epic screenings’ at the O2 Arena, marketed as ‘one of the most uplifting experiences you can imagine’. As I.Q. Hunter notes in our book, repeat viewings and audience participation are hallmarks of cult film appreciation and so Mamma Mia! presents an interesting challenge to ‘the masculinity of cult’, enforcing a broadening of its horizons in order to take account of a film that in many ways is absolute anathema to its macho maverick ethos.

Posted by Eylem Atakav and Melanie Williams at 04:43 1 comment: