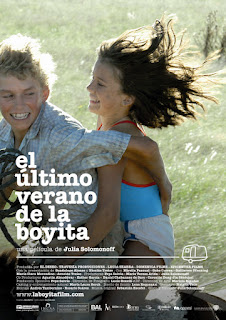 Jorgelina mentions that she is Jewish when offered some pig’s cheese; we later see her praying rather clumsily to the virgin, and there is no further mention of her Jewish identity. Were you seeking to make a comment on Jorgelina’s ethnic/religious identity, or is this, in fact a minor issue when faced with the enormity of the changes in identity when we reach adolescence?
I always thought of this film as a celebration of hybrid worlds: urban/rural, male/female, Jewish/Catholic and even HD/film. La Boyita, for instance, was a brand name for trailer homes that could float, a sort of domestic amphibious space: you only needed to add an offshore motor and there you went, floating away in this funny looking tropical igloo… and the pig cheese does exist, it’s a medley of grease, bones and cartilaginous tissue. Being Jewish was her best alibi against such gastronomical atrocity…
Manuel Puig (the Argentine novelist) has critiqued the way Argentine culture over-intellectualizes issues. I was wondering if you share this view?  I’m thinking of the time when Jorgelina’s mother’s friend says that she should see a psychologist, when in fact she’s just sad, worried about her friend and a little lovesick.
Yes, we Argentines have a tendency to overanalyze. And in this particular case, I feel that “send her to the psychologist” is a typical Argentine urban middle class reaction. These women are trivializing by reducing Mario to “interesting conversation material” a slightly sophisticated form of gossip and of course, Jorgelina rejects that.
Her silence is the opposite of Elba’s (Mario’s mom): Elba’s silence is one of fear, denial, shame. Jorgelina keeps the secret as a testimony to their bond, an intimacy that she cherishes...she discovers the meaning of privacy.
This film reminded me of two of my favourite Argentine films, XXY by Lucia Puenzo and La niña santa by Lucrecia Martel, and it struck me that they can be seen as sister/brother films, although each brings something special and wonderful to the new world experienced by children entering adolescence. Do you agree that there are some similarities between the three films?
Sure, we are three Argentine women directors from the same generation. Let’s say our films are cousins. The paradox is that the similarities are easier to see from the distance: they become more apparent to the outsider. Once you are inside the family, you see the differences more than the commonality.
What about other influences on the film, for example aesthetic ones?
I was very inspired by Víctor Erice’s films, especially in terms of the child’s gaze, a gaze which contains a certain darkness, fantasy and silence. My appraoch to the countryside, space and many other things was influenced by Erice…
The sequence where Jorgelina walks into the woods at night looking for Mario certainly recalls Spirit of the Beehive…
Exactly. Of course, I had dreamt of having Ana Torrent play Jorgelina (laughs). We’d all have liked Ana Torrent to stay young forever to star in countless films! There’s another film that I love, My Life as a Dog by Lasse Hallström. Those two for the child’s gaze. Then there are others that have more to do with nature. I really like the films of Satyajit Ray, and the way he uses elements of nature metaphorically. And in terms of Argentine or Latin American film, I really love the work of Lucrecia Martel, one of our most important directors.
I use contemporary photography a lot too, for colour, texture, dramatic or narrative situations. There are two Argentine photographers who are really important to me, Alessandra Sanguinetti (who’s American-Argentine) and Guadalupe Miles, who both work with the body, and the intimate lives of girls. There’s another photographer who I love and I always use as a reference, and that’s the North American Sally Mann. She’s a very important source for me.
Mario gains a sense of confidence and self-worth over the course of this film, partially through his friendship with Jorgelina.  The open ending is perfect as Mario stays with the viewers and we worry about him and wonder what the future holds for him. Do you have a sense of what the future holds for Mario?
I decided to stay in that summer, to not go beyond it, because I wanted that decision to be his, not mine. When you get inside the story, when you believe in it, the characters become so real that there are certain things you do not feel entitled to do.
Going back to Jorgelina, it seems to me that you present her as a desiring being, and as not necessarily straight. Is it important to you to undermine that view we have of childhood as, at the same time, heterosexual and asexual?
Yes, absolutely. I imagined her to have an openness, an ambiguity if you like. And I don’t know if it’s her, or just the moment she’s in. I feel that the older sister (Luciana) because she’s now an adolescent, has clearly taken up certain positions. She’s very much the little lady, the ‘señorita’. And Jorgelina is not, she has another role. I always imagined, when doing the casting, that she would be a bit of a tomboy.

Can you say something about the production process of El ultimo verano de la Boyita? How difficult was it to find funding for the project? And, what was the involvement of el Deseo/Ibermedia and the other companies/funding bodies involved?
My first film, Hermanas, was very hard to finance. It took place in 2 countries (Argentina and US) and in two different decades (the 70s and the 80s). It was a “domestic” political drama, most of it happened inside houses so I thought (wrong!) that it wasn’t expensive… the funding was very hard and strenuous and it somehow burdened the shooting process, adding an extra weight to the already overwhelming expectations of the first feature.
When I decided to make la Boyita (a story that is previous to Hermanas but I did not feel ready to direct first) I knew I needed to go back to the joy I had shooting short films. I wanted an intimate and friendly environment. I shot Boyita with almost half of the money of Hermanas, and because Hermanas did well (not great, but well) the producers were ready to take the risk.
In both films I got help from Ibermedia, a very important institution that supports Iberoamerican co-production. I developed the script in a writers’ residence (Fundacion Carolina/ Casa de America) in Madrid and in the last days I called El Deseo and asked to talk to Esther García (El Deseo’s production manager), who I had met briefly on Isabel Coixet’s set and had seen Hermanas. I took the script with me (it was a 3rd or 4th draft I believe) and I told her the story the best I could…three months later she sent me an email asking what stage we were on…
That email was very timely, because around then I had visited Tuto (who I had known for 2 years already and had been recording snippets of his life in home videos) and this time I felt that he was approaching a crucial moment of transformation into a teenager… I saw him in the winter and felt that if by that summer we were not shooting, we would miss our opportunity; he would start to change his voice, maybe develop more manly features...
I showed the video to El Deseo, told them that all I needed was the money for the shoot, that I would not mind waiting for a year to edit and do post but I could not afford missing Tuto, who had become irreplaceable to me…
They were a key support and their faith in the project gave confidence to Lucia Seabra and Maria Teresa Arida (the producers), who had been involved since the development…
How involved are you in the distribution/exhibition process and has this process fulfilled your hopes/expectations?
I try to stay as involved as I can, because small films like mine do not have publicists, and a budget for advertising. They depend enormously on the love and care of the producers and distributors and their ability to get the attention and critical response. In the case of France, for instance, EPICENTRE, the co-producer/distributor did an amazing job and the film was very successful in both ticket sales and reviews. In some other countries I was not as lucky… live and learn.
But overall, it’s been a great ride; the film has been winning attention by excellent word of mouth and has won over 20 international awards. I am very grateful to see how different audiences respond in such a loving, emotional way to it.
Is it possible to talk in terms of a generation of Argentine filmmakers? Do you forge collaborations with other filmmakers, and are there any particular bonds with other women filmmakers?
Yes, certainly. I belong to a group of Argentine director-producers called PCI (Proyecto de Cine Independiente). It is a group of about 50 filmmakers that is now almost 15 years old, where you find Lucia Puenzo, Pablo Giorgelli, Ariel Rotter, Celina Murga, Ana Katz, Rodrigo Moreno…there is no aesthetic dogma or “alignment”, our reason to be is to defend independent filmmaking from development to exhibition, share information and fight for better institutional policies and transparency. Over the years we have grown and became a voice with relevant representation. It is less well organized than the French ACID but pretty similar in concept, I believe.
I have been living for the last 2 years in New York, teaching at Columbia University, but I am still copied in all emails and try to stay as present and updated as I can.
On the other hand, my first short film won an award from  “La Mujer y el Cine”, an organization that has been active for over 25 years.  Their support meant a lot to me, and I have since been involved in this organization.
Can you tell us a bit about what you are working on now?
I’m writing a feature to shoot here in New York and in Buenos Aires. I’m also working on an adaptation of a novel called Las grietas de Jara which is a story about urban transformations, and how, with a certain level of political negligence, and a certain amount of corruption, whole areas, neighbourhoods and ways of life can completely disappear. I saw it happen in Palermo, in Buenos Aires. In five years whole streets can disappear, streets that have been there for 100 years. But the city is really just the backdrop for the film, it’s about individual responsibility, and it’s a thriller too – though what interests me about the thriller is of course the plot and the suspense, but really using it to ask these other questions, questions about power and space in the city.

Posted by Eylem Atakav and Melanie Williams at 13:55

Email ThisBlogThis!Share to TwitterShare to FacebookShare to Pinterest
Labels: Julia Solomonoff, The Last Summer of Boyita