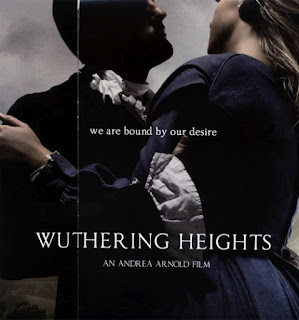 
Andrea Arnold’s latest film is based on a book; you may have heard of it. Of course, when a film is an adaptation of a Great Novel that tends to dominate discussion of it, sometimes to the exclusion of all other factors. How faithful it is to the literary source, and how it tries to differentiate itself from previous famous adaptations of the same raw material become the key questions. But it’s worth pointing out that this critical territory is new for Arnold who made her name with intense, contemporary dramas based on original material such as Red Road (2006) and Fish Tank (2009) and so she is a newcomer to the world of ‘it wasn’t like that in the book’. She may not take up permanent residency there either; having stated in interviews that this is the only work of classic literature that she’s really been drawn to as a film subject. Wuthering Heights has proved an irresistible lure for more than one female creative artist – think of Kate Bush’s unique musical re-telling of Emily Bronte’s story. Arnold’s challenge was to be both true to the book and to her own vision - ‘I really wanted to honour Bronte’, she said, ‘Wuthering Heights is a strange, dark, and profound book and I wanted to honour that spirit. I made decisions that felt true to me but also true to the spirit of the book’ - a balancing act which she pulls off with impressive accomplishment.
Arnold and screenwriter Olivia Hetreed make the same editorial decision as the celebrated 1939 William Wyler film of Wuthering Heights – to chop out the material on the subsequent generations and to focus exclusively on the imagination-capturing central romance of Cathy and Heathcliff. Although this is a very rough-and-ready version; hard to imagine Olivier’s Heathcliff announcing to the gathered Lintons ‘you’re all cunts’ as James Howson’s Heathcliff does in this film. And this brings us to one of the most notable aspects of the film; its casting of two black actors, Howson and Solomon Glave, to play Heathcliff as man and boy. This choice makes explicit something which is hinted at but never said directly in Emily Bronte’s original novel: she describes the character variously as ‘dark-skinned gypsy’, a ‘Spanish castaway’, and ‘little Lascar’, indicating South Asian ethnic origin. Previously the role had always been played by white actors but usually emphasising a dark, brooding quality. But in this version, what the book might have been implying is given definite substance on the screen. In a way, it makes sense of a lot of things; the extreme social exclusion and prejudice suffered by Heathcliff (the scenes in which he is stripped and stabled like an animal in the film speak to this, as does Hindley Earnshaw’s insistence on calling him nigger) and the interdictions on a relationship between him and Cathy which are no longer just about class anxieties but the taboo of miscegenation.
At the beginning of the film we see Howson running at and slamming into a wall on which are scrawled the childish scribbles and drawings of his younger self and young Cathy. He’s trying to get back there, to smash through the border between present and past. Cathy and Heathcliff’s allegiance, poised between platonic and sexual just as the two children are poised on the cusp of adolescence, provided the only moments of solace and warmth in his otherwise harsh youth. Arnold refuses any kind of heritage prettification of the story; instead bringing to bear on it the sensibility she had honed in her previous contemporary-set films. It’s certainly a very elemental film, and you get a real sense of the cold, the damp, the rain and (especially) the wind besetting the Yorkshire landscape. The camera dwells on miraculous growth, flowers in the cracks, green shoots springing from boggy mires, nature’s persistent fecundity. It also suggests the sensuality of certain moments, as with Heathcliff’s first ride on horseback behind Cathy; the mingling of the textures of warm horsehair and Cathy’s windblown tresses, and the gentle sounds emanating from of the horse’s slow progress across the moor and its insistent quasi-sexual rocking motion, all conspire to make this a memory seared into Heathcliff’s mind for all time. Likewise the play fight in the mud which seems to mark the point when latent sexuality becomes a tangible (and dangerous) possibility.
Meanwhile, the attractions for Cathy of marrying into the wealthy Lintons are made plain by the contrast between her bare farmhouse and the elegant décor of the home she marries into, a contrast as striking as the fleshy young hoyden who grows up into a fine-boned beauty (played by Skins’ Kaya Scodelario). But this is a tragic story, not a positive tale of female social mobility. Cathy is haunted by the loss of Heathcliff and goes into terminal decline when he returns years later, a wealthy self-made man, and sadistically elopes with her sister-in-law, just to prove that he can. Cathy had admitted to her old housekeeper that Heathcliff was ‘my soul’ as they sat together in the intimacy of firelight, unaware that Heathcliff was also hidden in the room, overhearing her confession (spying from a concealed position is a recurrent Arnold motif). But the soulmates still can’t overcome the impediments to their love; they never make it back to their childhood idyll, at least not in this life. The other Bronte adaptation of 2011, Cary Fukunaga and Moira Buffini’s Jane Eyre (indications of a mini Bronte boom?), concludes on a happier note with its couple reunited. No such solace is offered in Wuthering Heights. Arnold’s film is a radical take on Emily Bronte’s novel but its bruising brutality and insistence on the primacy of the senses serves its source material very well.
Posted by Eylem Atakav and Melanie Williams at 03:43