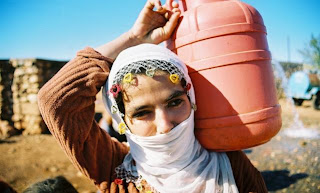 In Eylem Kaftan’s 2005 bio-documentary Vendetta Song a group of men are asked what honour means and one answers: “Honour is everything for Muslims. It is everything in Islam.” Vendetta Song is a significant film that calls for an analysis for its exploration of honour killings, gender inequalities, the traditional practice of arranged marriages and the semi-feudal social structure in Eastern Turkey within the context of Islamic tradition. The film problematizes the relations of the West to the East (both within and outside Turkey) as the narrative is structured as a travelogue of a woman travelling from Canada to Istanbul and then from Western to Eastern Turkey.
Religious values are significant determinants in cultural practices and customs in Turkey: honour crimes may not be religious but they are certainly religiously practiced. Indeed, violence shapes gender relations in various ways: both in reality and at the level of representation it resonates at different levels: verbal, physical, emotional. I raise three main questions here about the relationship between cinema and religion. The first question is: what can be said about the nature of the relationship between religion and tradition at the level of filmic representation? The second question is: why and how are honour crimes regarded as a customary practice of ‘the East’? And finally: how does Vendetta Song as a film which takes the previous two questions as its focus represent these complex links between the concepts of honour crimes, religion, patriarchal tradition, and ‘the East’? Honour crimes are generally associated with Islam and the East. However, there is in fact no intrinsic or necessary link between them.
Vendetta Song problematises the concepts of Islam and tradition whilst at the same time positioning honour crimes within an Eastern context. The film, on one hand, critiques gender politics through its feminist discourse and, on the other, attempts to deconstruct this misperceived connection between Islam and violence against women. Whilst doing so it also places emphasis on tradition rather than religion. The two are distinguished, and whilst it is accepted that they might intertwine, or that one might be overlaid on the other in practice, by thus distinguishing them, space is opened up for the possibility of critique. The tradition is a patriarchal tradition – and this is what the film focuses on. However, there is a serious issue whether the film, although it appears to want to draw this distinction between tradition and religion, succeeds in doing so clearly or consistently. Whether this is because of the aesthetic choices made in the film or whether it is a consequence of the self understanding of those filmed is another issue which needs to be carefully considered. Members of a society can subjectively (but falsely) believe that things which are not intrinsically linked are thus linked. The point, then, is that religion and culture or tradition are different categories and should be distinguished as such. The fact that a certain tradition or culture is largely based on religious practice in fact does not obscure this point. To conclude, I argue that tradition should not be thought of as justification to practices including honour crimes. To invoke tradition to justify a (violent) practice is not sufficient. Instead, institutional practices must be targeted to think about the reasons behind patriarchal discourses and violent practices.
Posted by Eylem Atakav and Melanie Williams at 03:50