For the past decade, Romanian cinema has seen a prosperous period, gaining positive critical and public reception. Previously unknown to critics and scholars, Romanian cinema secured itself a leading role in world cinema. Considered by many a new wave, the filmmakers themselves have preferred the term of ‘new generation’ instead, putting similarities on account of their common upbringing.  An interest for same thematic platforms, realism, and similar stylistic choices are just some of the common traits which have enabled films scholars to place the majority of Romanian films under the same umbrella. One of these aspects is represented by the interest in women’s issues and female characters. Telling stories with and about women has never been a major line for Romanian cinema; films made during communism until the inception of the new wave have been limited to displaying stereotypical female characters, life situations and experiences. This has been changed by the new generation, and an important share of the films made in the past ten years have been interested in women’s issues or presenting life situations from feminine perspectives.
4 Months, 3 Weeks and 2 Days (Cristian Mungiu, 2007), Ryna (Ruxandra Zenide, 2005), First of all, Felicia (Melissa de Raaf, Razvan Radulescu, 2009) and The Happiest Girl in the World (Radu Jude, 2009) are just some of the latest productions which deal with women’s issues. The new modes of women representations by the new Romanian cinema are not limited to these films, instead are to be found in various forms throughout the works of the new generation. The alternative modes of representing women proposed by latest Romanian films can be seen as a medium of dealing with women’s issues, female character and femininity in cinema. The filmmakers do not express any feminist agenda, the products are not explicitly women cinema, but they hint at possible ways of empowering female characters and displaying women’s experiences on film.

Most of the characters are still placed in patriarchal embedded situations and are positioned in domestic areas; however, they do not tend to be dependent on the men around them, they are not being defined only through their relationship with men or their gender. A very important new aspect brought in by Romanian cinema is represented by realist characters; the women are not labelled in boxes or objectified, they are constructed as human beings, active and outspoken, with flaws and aspirations, having professional life and families. They are frustrated, irritated or dreary with the patriarchal modus operandi, and the inability of men to understand and appropriately communicate with them. The female characters seem to be more prone to change and action, even when they cannot change things, they voice their complaints. This energetic process of character development, completed with a predisposition towards women’s issues and feminine subjectivity can be interpreted as a search for identity of most women represented in the new Romanian cinema. The variety of female characters and women experiences found in the new generation of films proves more feminist than the display itself, acknowledging the diversity of women and the manifold implications of being a woman. The films offer a great range of characters - from prostitutes to middle class students and high end overprotective mothers, a variety of situations past and present which have taken their toll on women. Completing the narrative techniques, the visual style, cinematography and editing choices are working towards the centrality of female characters and women’s issues. The cinematography of films such as 4 Months, 3 Weeks and 2 Days, Francesca or The Happiest Girl in the World is based on the centrality of female characters, with the shots are constructed around the women, with the character placed in the centre of the image. The shooting angles and editing techniques are allowing a greater space for women to perform and present their realities. 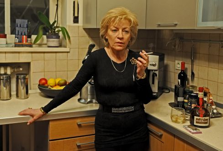 3.The Happiest Girl in the World   4.Child’s Pose
A different cinematic agenda (the new generation of filmmakers have been exploring alternative narratives in their quest to distance themselves from previous Romanian cinema), or a formula for international success are all possible explanations or, at least points of discussions for the interest new Romanian cinema has in women’s issues.

Posted by Eylem Atakav and Melanie Williams at 02:33