Identifying the experiences of Frances, Ivy, Nora and ... many other women in the first generation of British cine-clubs 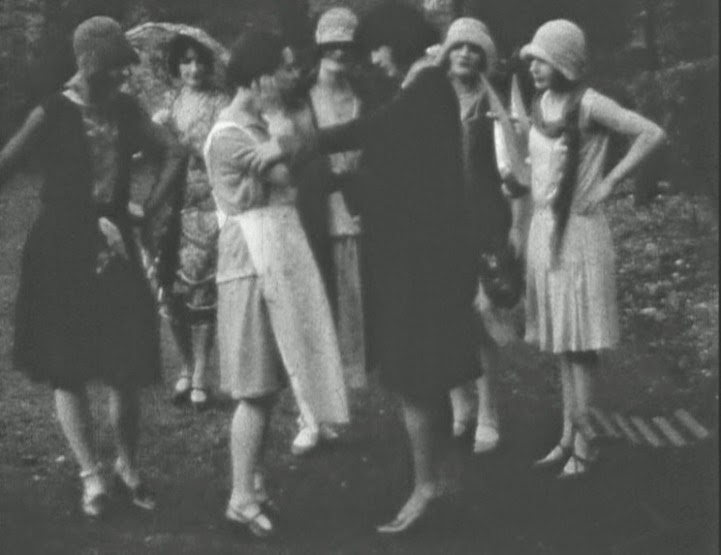 Sally Sallies Forth (1929), heralded at the time as the first amateur film produced wholly and exclusively by women, the IAC film collection, held at the East Anglian Film Archive. To see the whole film go to http://www.eafa.org.uk/catalogue/3823


In recent years the involvement of women in amateur film-making has attracted the attention of a number of scholars and film archivists.  As far as the involvement of British women in amateur film production is concerned, valuable work has been performed in identifying individual women amateur film-makers in the 1920s and 1930s.  This scholarly work usually makes use of home movies, highlights the work of individuals and focuses attention on the person in possession of the camera, identifying in the process films produced by women as important historical records in their own right.  However, the focus on female film-makers also overlooks the experiences of many women who engaged with film production in the collaborative environment of Britain's inter-war cine-clubs, particularly in the production of amateur fiction films in the cine-club studio environment.
Cine-clubs emerged in Britain as sites for an amateur engagement with film production, distribution and exhibition from the mid-1920s.  Still relatively unexplored as a collective form of leisure, reports submitted by cine-clubs to amateur film-making magazines in the 1930s indicate that these clubs offered women opportunities to engage with film culture as film-making democratised, even though the contributions women made to club life were only very rarely acknowledged by editorial decisions taken in the production of these magazines.
Although the participation of women in cine-clubs was largely ignored by these magazines, the very same magazines often included still photographs of cine-club productions.  These photographs not only indicate that women took part in film production but that they often did so in productive roles which did not involve filming.  Notably, stills published in these magazines indicate that much of their activity was engaged in jobs and roles that frequently went unrecorded.  Unlikely to be credited on screen, recorded or valorised in amateur film magazines, this activity falls into what has been referred to in the commercial environment as the invisible labour of women.
In April 2014, I presented a paper, 'Sally Sallies Forth: The involvement of women in the first generation of British cine-clubs', at the second international conference of the Women's Film and Television History Network - UK/ Ireland.  Using information I had accumulated over the last five years about the involvement of women in the first generation of British cine-clubs, I appraised the activities of women in the collaborative environment of the London Amateur Cinematographers' Association ("London ACA"), one of the first British inter-war cine-clubs.
My paper identified in this inter-war middle class association an environment that offered women an interaction with film culture and film production.  It also identified a clear contradiction between the culture of the London ACA, which encouraged individuals irrespective of gender to develop skills and an understanding of all aspects of film production, and the opportunities open to women in the production environment.  Although it is clear that women in the London ACA were not restricted in any formal way from participating in the club's activities including film production, it is nevertheless apparent from my research that the production culture in the cine-club might have prevented them from participating on an equal basis in film production.  While it is difficult to detect "formal gendered pathways" as well as "more informal mechanisms, habits and working practices" in a leisure environment in the same way that Vicky Ball and Melanie Bell have been able to in the organisation of labour in film and television industries, it is notable that the experiences of women in the production environment of the London ACA were different to men.  Women in the London ACA only very rarely moved across different production roles.  This contrasts starkly with the experiences enjoyed by men in the club.  Drawing on information I had pieced together about the experiences of Frances Lascot, Ivy Low and Nora Pfeil, my paper speculated on the networks that existed in the London ACA, the opportunities available to individuals and the informal gendered pathways that existed in the club.  I observed, as in the case of Sally Sallies Forth, that it was possible for women in the London ACA to control productions and to undertake a variety of production roles but, unless a woman was able to break into male social networks, to do so required determination, finances and an ability to construct her own networks in the club.

Posted by Eylem Atakav and Melanie Williams at 03:48